on January 18, 2019
Truth: 3D ultrasound images make me want to vomit and hide from pure horror.  Before 20-weeks, they look like a variety of Cheetos and after 20-weeks they look like a 5-year-old made a baby face out of classic 90's Silly Putty.  You know the kind, right?  Smelled like hands/old zucchini/playground swings after 3-minutes? 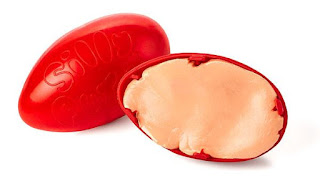 Last week's ultrasound, our amazing technician forced us to embrace the images and learn to appreciate them...which didn't work.  However, I will say the babes' cute button noses weren't terrible to look at.

For those keeping track, I was 23 weeks on Monday of this week [January 14th] and I was given major words of encouragement that I should be able to make it to 33 weeks.  Quads A-D are currently weighing in at 1 lb. 3 oz., 1 lb. 3 oz., 1 lb. 5 oz., and 1 lb. 2 oz. respectively.  Not mean anything to you?  Me neither, so the equivalent is a Chinchilla according to my pregnancy app, "Ovia Pregnancy."

We also had an ultrasound first-timer in-tow: Big sister Elsie!  She did FANTASTIC, but not without some awkward toddler moments wrapped in...


Please enjoy the following updated pictures, 3D images, and videos.  The videos are proof that these babies are not only picking on each other but also starting to wreak havoc on my outsides, which -- I know, I know -- it's only the beginning!

Quad A: "The Favorite" 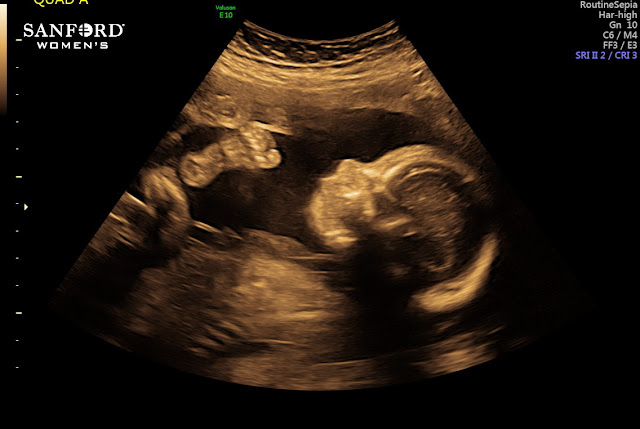 Even though Quad A was donkey kicking, only Quad D was taking the brunt.  However, I see this affecting me eventually so this child may need to be re-nicknamed.

Quad B: "The Inmate" 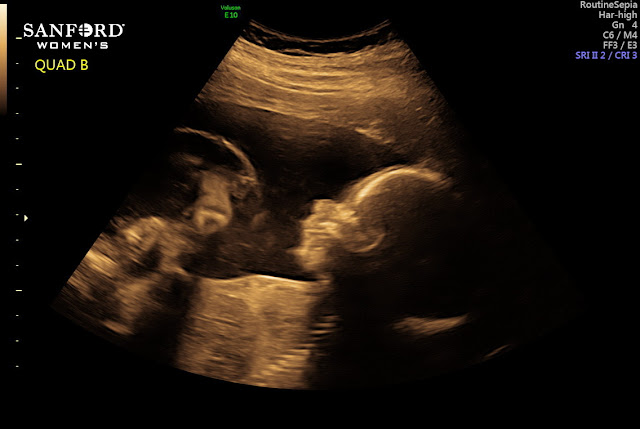 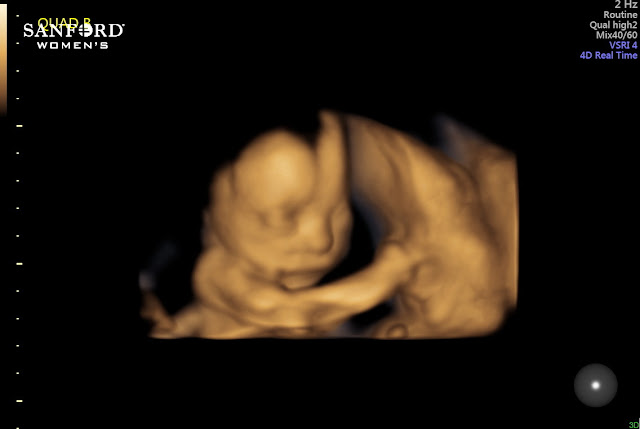 Quad B was well-behaved compared to previous ultrasounds, so the good behavior was noted in its file. 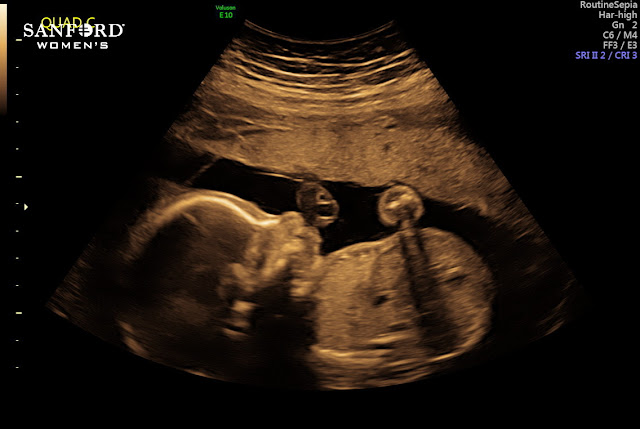 We've seen all 10 fingers on this babe, but at the same time, I had frightening flashes of Mii hands when first saw this image... 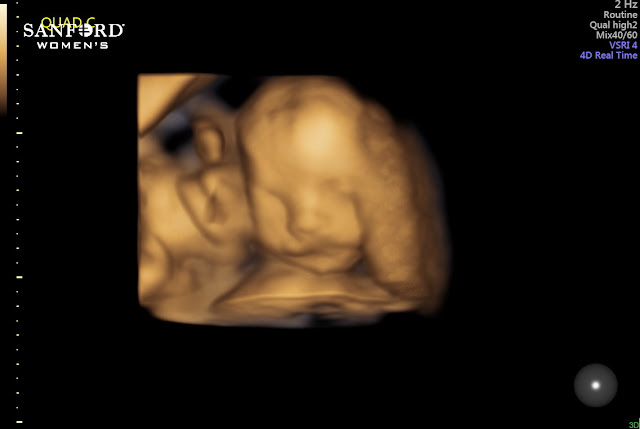 The model has been the most active the past few weeks -- attention seeking to the max!

This babe did not disappoint!  Entertainment was had by all in the room while Quad D lived up to its nickname! 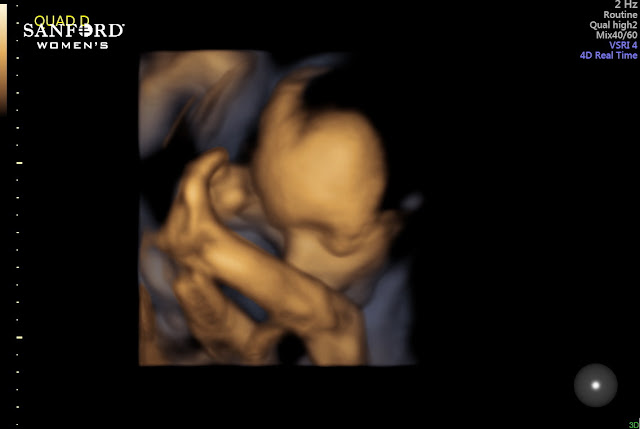 Why was sweet, acrobatic Quad D doing this, you ask? 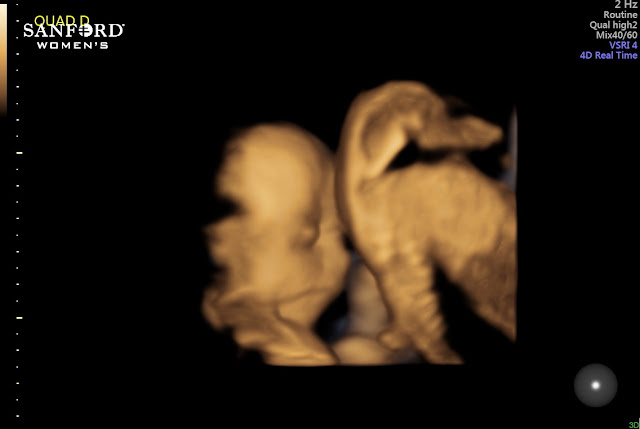 Can't figure out what that is? 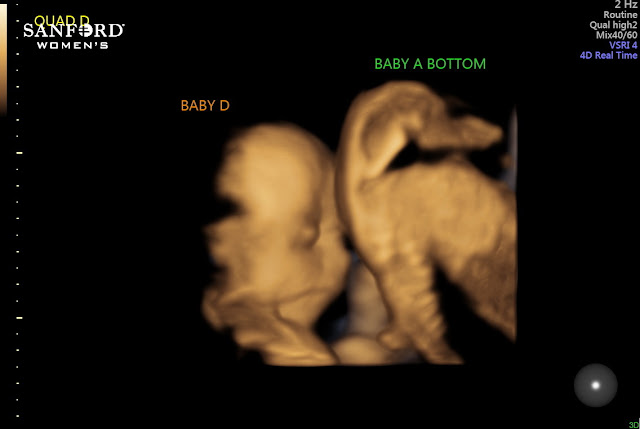 I feel like this is just a given in our future and this is not a battle I'm willing to fight.

I think we should just appreciate Quad D's flexibility and talents...

*"Womb" is a cringy word that I just can't help but include.  Sorry, not sorry.

I'm not going to throw shade to any other photographers...but mine is DA BOMB DIGGITY.  Seriously, she continues to rock my world with her amazingness and I want to basically do this every time she comes near, sends me photos, gives me goods, or basically gives me any attention... No joke. She has spoiled my babes endlessly with her talents and with so many gifts, including the octopi from a few days ago... ...among some other goodies that you will see soon! She totally gets me and my non-caring attitude towards everything photographic -- meaning she totally gives me orders and tells me what to do -- it's a win, win.  Plus, once you find out someone else is addicted to Gilmore Girls, too, you're basically together for life, right? ALL HAIL TAYLOR of  Taylor Jane Photography !   You guys.  She literally dressed her daughter up, brought a mini cart, and did a photo shoot at Target.  So, when she said that quadruplets were on her bucket list -- I was AL